Charismatic frontman of Las Vegas based stadium rock band The Killers, Brandon Flowers has said that his sophomore solo album is “definitely going to be different”. Flowers is currently in the studio working with producer Ariel Rechtshaid to record the follow up to 2010’s Flamingo. 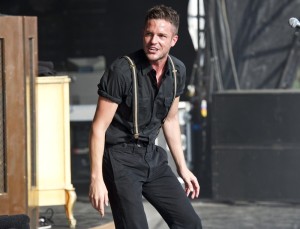 In an interview with NME magazine, Flowers went on to discuss the highly anticipated album. “Even though I’m still young, you can start to get set in your ways. Change is good and there’s always growth, I’m always looking for that. It’s nice to steer the ship and that’s what you’d think I’d do on my own album, but I’m letting Ariel take over every now and then. That’s led to some really exciting things and sounds I would never have used. As I’ve gotten older I’m much more open to that – I’m much more open to peoples’ strengths and really trying to utilise them and that’s where Ariel comes into the picture. He’s really knowledgeable about every genre; it’s pretty incredible what he’s able to reference and pull out. It’s definitely going to be different, but I’m still in the thick of it, hammering away.”

Stay tuned for more details on Flower’s upcoming sophomore album and the eventual tour that will most likely coincide.