In a an extremely rare and unexpected announcement, his Holiness the Dalai Lama will appear at the massive Glastonbury Festival located in England. The Dalai Lama will headline the UK festival’s morning slot at the Pyramid Stage on Sunday, June 28th. 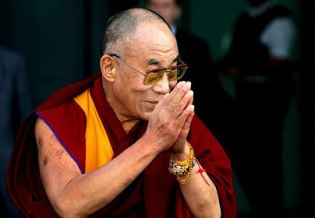 The beloved Buddhist monk will deliver a “message of compassion and mutual understanding” during his time in the morning. I do not know how this happened or what the discussions were like to get the Dalai Lama a place on the bill, but whoever it was deserves a big handshake or perhaps even a hug.

The Glastonbury Festival 2015 takes place in June on the 24th to the 28th in Pilton, UK. Tickets are completely sold out and fans can only sit back and wait for the huge line up announcement that is surely right around the corner.

Check out the Dalai Lama on stage with comedian Russel Brand below.